Written by Dotun Pholdz on October 14, 2015. Posted in Gistzz, Uncategorized

Fresh facts have emerged on how a gang of armed robbers, all dressed in Army camouflage, stormed the Access and Diamond banks branches on 4th Avenue, Festac Town, Lagos state Nigeria.

mAdE t.V sources, at the scene of the incident, gathered that the well-equipped robbers, about fifty in number, gained access to the area through a canal which was not quite close to the banks and continued shooting sporadically into the air.

Eyewitnesses, who all refused to reveal their identities, noted that the gunshots were sounding like bombs as the robbers stood at either side of both banks to carry out their operations.

“I have never seen anything like this in my life,” one man who said he supplies newspapers to the Diamond bank, began.

“I was inside the bank to deliver newspapers to them when the men came in, all of them putting on soldiers’ uniform.

“I had seen them before they got into the bank, but I ignored them because they looked like routine soldiers.

“However, they got into the bank and asked us all to carry on with our businesses because they had only come for the bank manager.

“‘Where is the manager?’ One of them asked.

“‘If you don’t provide him now, I will shoot all of you here,’ that was what I last heard before they continued with the sporadic shooting,” the vendor who looked to be in his mid fifties, offered.

Tension remained sky-high as at the time of visit, but a few residents were still discussing the matter.

Another eyewitness, who sustained injuries while trying to run from the direction of the gunshot, was simply grateful to God that it was just injuries that he sustained to his hands and not a gun shot in the head.

He said: “I was coming from 402 road when I heard the sound, I just could not fathom the direction and the kind of sound it was.

“I got on all fours and started running away, that was how I sustained the injuries.

“As you are talking to me now, I just know that I am talking, I am not really myself here. I can only return to normalcy after the injury has healed.”

On how the robbers managed to escape, the vendor confirmed that they went through the canal within the area.

He said: “they dragged three sacks of money out of the bank, they were so heavy that they could not lift them up. Too much money, my brother.

“They went out and were still shooting until they escaped through the canal close to the bank.

“In all honesty, they did not point the gun at anybody, anyone who was hit would have been caught by stray bullets.”

Residents of the area are still in shock as the incident, to many of them, remained a mystery.

Meanwhile, customers have been left stranded as all banks in Festac have been shut following the incident as police officers and soldiers have invaded the area to cordon off passersby and others who may be coming close to the bank.

However,information reaching us suggest that a woman and her little baby were hit mistakenly during an exchange of gun fire between the dare devil robbers and the Nigerian Police.

Hours after the dare-devil armed robbery gang numbering over 40 stormed both Diamond and Access Banks at 4th Avenue, FESTAC Town, Lagos, the Area E Command said they tried their best despite being at a disadvantage numerically.

Speaking with mAdE t.V sources, the Area E Commander, ACP Frank Mba, said they recovered about 27million from the robbers, who were forced to drop the stolen money before they fled.

He also said they recovered about 240 rounds of  AK47 live ammunition, adding that the money has been deposited at another branch of Diamond Bank, still in FESTAC Town.

Photos of the incident below… 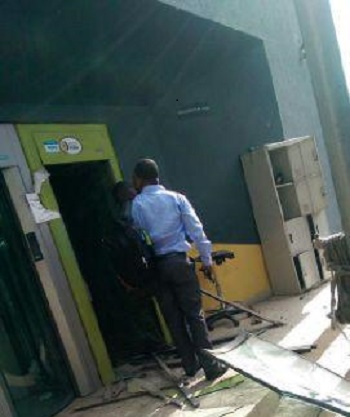